Gold prices post a weekly loss after four consecutive weeks of gains. On the contrary, Hedge Fund Managers Boost Net Bullish Gold Bets to 5-Week High. Gold declined as risk appetite runs wild, with the S&P 500 making a fresh record high and Treasury yields ending higher.
The bond yield is the percentage return on investment for a bond. They are, in other words, the interest rates given by bonds. Bond yields are inversely proportional to bond prices. The higher the yield, the lower the price, and vice versa. Because Gold and Treasuries are both regarded safe-haven investments, there is a positive link between gold and bond prices and a negative correlation between gold and bond rates. This is due to the opportunity costs of storing gold, which bears no income, therefore money flows from gold to bonds when rates are sufficiently high, and it flows in the other way when bond yields are too low. 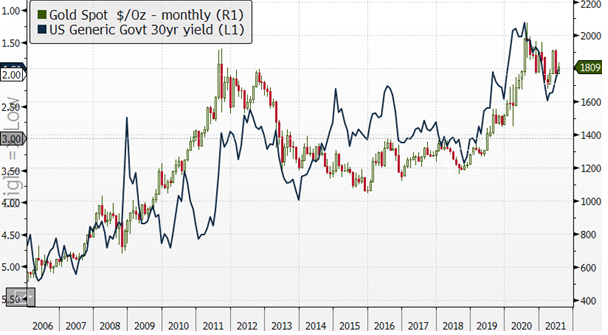 The 30-year US government bond yield is exhibiting comfort around 2% support, which is comparable to when it crossed 3% in 2019, which corresponded with gold climbing over $1,400 per ounce. Many commodities, including copper, corn, and lumber, have peaked in 2021, with crude oil being the notable exception. Just a slight reversal of crude to its longer-term bear market would be beneficial to bond and gold prices.

This chart illustrates gold’s relative discount to US debt-to-nominal GDP and G4 central-bank balance sheets as a percentage of GDP. A little of reversal in the stock market and a protracted fall in U.S. Treasury bond rates from the March peak may be a catalyst for gold to break through the $2000-an-ounce barrier level. We see gold more likely to approach $2000 resistance than sustain below $1700 support in 2H. Like bonds, the metal may provide a hedge vs. a rise in stock-market volatility.
The near-certainty of rising US debt-to-GDP and greater dependency on quantitative easing maintains our gold-price bias positive, particularly given the substantial discount from the 2020 high. The metal seems ready to restart its climb after falling roughly 4% in 2021 through July 15, and having retraced over 20% from record highs. The precious metal is expected to trade zigzag around $1800/oz until next week’s FOMC meeting. The debate over when the Federal Reserve will taper asset purchases is likely to intensify. Gold’s outlook remains optimistic, and every drop in the price of the precious metal should be viewed as an opportunity by yellow metal investors until the precious metal is valued over Rs 46,500 per 10 gm. The triggers working in favour of a long-term gold price rally are rising concern about global inflation, which appears to be persisting, and an increasing number of Covid-19 cases, which include the delta variant cases, in the US, some European countries, and South-East Asian countries, despite the fact that rising risk appetite globally has dimmed the appeal of gold to a large extent this year.

You may also like to read: Gold prices ekes out amid Risk-ON as the Chinese market tremors