After years of lying dormant, the gold and silver prices finally reacted in a big way in 2020.Traditionally seen as a safe place to store money, gold as well as digital gold began to rise as economic growth slowed in 2019, but the pandemic accelerated the rally and in August prices hit a record high of $2072/oz (Rs 56000/10 gm) and Silver touched levels around $30/oz (Rs 78000/kg).
Gold posted the biggest annual advance in a decade after a tumultuous year, with gains this year aided by the dollar’s decline to the lowest since April 2018. Gold ended the year around $1893/oz (Rs 50,000/10 gm) with 25% gains, while Silver was best performing metal ending around $26.5/oz (Rs 68,600/ kg) with whopping 45% gains.
Huge government debt, negative real returns on bonds and threats of inflation and market turbulence, all of which support bullions, will persist in 2021. Domestically, Gold, Digital Gold and Silver are expected to rise another 20% this year with price levels of more than Rs 60,000/10 gm and Rs 80,000/kg respectively.
2020-Year that went by
After years of lying dormant, the gold and silver prices finally reacted in a big way in 2020. COMEX Gold started 2020 a little above $1500 and climbed all the way up to $1700 by the end of February. During the first couple of months of the year, the selling pressure surrounding the USD helped the pair gain traction. The dovish shift witnessed in the US Federal Reserve (Fed) monetary policy in the second half of 2019 caused the greenback to weaken against its rivals in early 2020. In July, September and October of 2019, the Fed decided to cut its policy rate, federal funds rate, by 25 basis points in each meeting and lowered it to 1.75% from 2.5%.

However, a dramatic turn of events unfolded when a new virus that originated in Wuhan, Hubei Province, China, started to spread around the world and caused global panic.  On March 11, the World Health Organization (WHO) declared this novel coronavirus (COVID-19) outbreak a global pandemic. By mid-December, 2020, there were more than 72 million confirmed cases and 1.6 million coronavirus-related fatalities worldwide.
With countries being forced to shut down their economies and impose curfews to try to slow down the spread of the virus, an intense flight to safety took control of the financial markets and the strong demand for safe-haven US Treasury bonds triggered a sharp decline in the yields. The benchmark 10-year T-bond yield lost nearly 50% in a matter of weeks and touched a record low of 0.36% on March 9.

The global economic crisis caused by the coronavirus obliged major central banks to take drastic measures. In two emergency meetings that took place on March 3 and March 15, the Fed cut its policy rate by a total of 150 basis points to 0%-0.25%. Additionally, the Federal Reserve said that it will buy at least $700 billion under new large scale asset purchases with no upper limit. On April 6, the US central bank introduced three new emergency lending facilities, the Paycheck Protection Program Liquidity Facility (PPPFL), the Main Street Business
Lending Program and the Municipal Liquidity Facility. In July, the FOMC decided to extend all the emergency lending programs by three months to the end of 2020.
The European Central Bank (ECB), which had no room to cut rates any further, announced on March 12 that it decided to buy an additional €120 billion under the monthly asset purchases until the end of the year. A week later, the bank launched the €750 billion Pandemic Emergency Purchase Program (PEPP) and expanded the program by another €600 billion to €1,350 billion in June. Finally, the ECB increased the envelope under the PEPP by €500 billion to a total of €1,850 billion and extended the horizon to at least the end of March 2022.
The Bank of England (BoE) reduced its key rate 65 basis points to 0.1% in two meetings that took place in March. Additionally, the BoE expanded its Asset Purchase Facility three separate times and lifted the total amount from £435 billion in February to £895 billion in November. 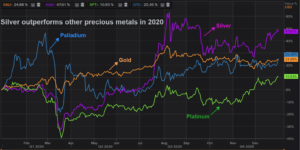 Traditionally seen as a safe place to store money, gold began to rise as economic growth slowed in 2019, but the pandemic accelerated the rally and in August prices hit a record high of $2,072.50. While demand for physical gold was hammered as the virus forced shutdowns, investment demand surged as reflected in the holdings of the world’s largest gold-backed exchange-traded fund, SPDR Gold Trust, which recorded its biggest yearly gain since 2009 at about 30%.

A safe-haven asset like gold, but also an industrial metal used in products including solar panels, silver climbed from $18 an ounce in January to almost $30 in August before slipping to around $25. Silver’s dual role and its greater volatility mean it could fare better than gold as economic growth picks up, and as U.S. President-elect Joe Biden’s push into clean energy prompts more usage.

The year 2020 sent the world economy into a tailspin, as the coronavirus pandemic struck without warning. The Indian economic situation was no different amid the unprecedented global health crisis, which knocked-off the rupee (INR) about 3.50% lower against the US dollar in 2020 after falling 2.50% in 2019.
The pandemic-induced two-month nationwide lockdown drove USD/INR to a record high of 77.82 in April 2020. Ever since the Indian rupee has recovered a part of the yearly losses, ranging between 75-72 in the third quarter of the fiscal year (FY) 2020-21.
Heading into 2021, the prospects for a continued upswing in the domestic currency appear upbeat, as India’s economy is set to recover from damage caused by the pandemic. The INR bulls remain hopeful the Finance Ministry’s USD260 billion fiscal stimulus package would help revive the economy.
Following 135 basis points (bps) of rate cuts in 2019, the Reserve Bank of India (RBI) slashed the key repo rate by another 115 bps in 2020 in an effort to boost credit supply and stimulate economic recovery. The effect of a low-interest-rate environment on growth will continue playing out, as the central bank is seen holding rates until the first half of FY21.  The RBI could likely maintain an accommodative stance but refrain from further rate cuts, in the face of the worryingly high inflation levels, which could threaten the economic rebound.
Forecast for 2021
A global economy that’s in recovery mode from a COVID-19-induced slowdown, a weakening U.S. dollar, unprecedented monetary stimulus and supply constraints is providing a favorable backdrop for everything from oil to copper to gold. A return to normality with mass COVID-19 vaccinations could make risk-sensitive assets more attractive, especially in the second half of 2021, and dampen the demand for the yellow metal
Signals are appearing that suggest the start of a “sustainable positive feedback loop between commodities, the dollar and emerging-market growth that has driven past structural bull markets. Precious Metal prices, meanwhile, are expected to benefit from rising inflation expectations and a drop in the U.S. dollar in response to the large amounts of monetary and fiscal stimulus used to combat the economic slowdown caused by COVID-19.
Huge government debt, negative real returns on bonds and threats of inflation and market turbulence, all of which support bullions, will persist in 2021. Domestically, Gold and Silver could rise another 20% this year with price levels of more than Rs 60,000/10 gm and Rs 80,000/kg respectively.