Four charts which conveys gold bull run is far from over

Precious metals markets got clobbered last week as gold and silver broke down from their high-level consolidations.  Gold prices fell below the $1900 level; meanwhile, silver plummeted below $24 an ounce and traded as low as $22. Strength in the U.S. Dollar Index seemed to be the catalyst that got the selling going.  Once key technical levels got breached, the selling intensified.

Some of the volatility seen in metals and equity markets in recent days is attributable to the failure of Congress and the White House to agree on a new stimulus package, with the focus shifting to filling the Supreme Court seat once held by the late Ruth Bader Ginsberg.

The rally in gold, often used as an inflation hedge, has also flagged as the dimming view of the recovery undercuts the outlook for a rise in consumer prices. A line-up of Federal Reserve officials have said the central bank alone can’t boost prices and the economy would falter without more aid. Gold has fallen more steeply of late than currency exchange-rate developments would have led one to expect.

Gold’s slump could prove temporary with increased uncertainty over the U.S. presidential election. Any added conflict in the run-up to the vote should help lift the precious metal. Gold fundamentals are still strong, and below four charts shows that Bull Run is far from over:

In a global economy increasingly accustomed to quantitative easing (QE) and dependent on fiscal stimulus, gold should remain among the top-performing metals, in our view. Rapidly advancing technology and electrification are lifting industrial demand for silver and tilting its performance toward that of copper. Above graphic depicts the change in the prices of Gold and Silver since just prior to the financial crisis in 2008. The fait accompli nature of global central-bank QE is a primary tailwind for advancing gold prices. The more-industrial metals — which silver is gravitating toward  and stock markets increasingly depend on fiscal stimulus that has become less certain. Rising debt-to-GDP levels also support gold prices. 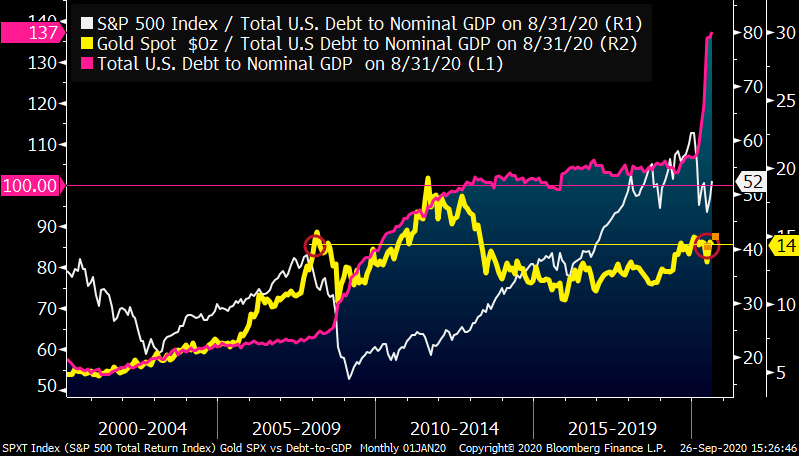 Gold is basically unchanged in 2020 and since 2007 when compared with rising U.S. debt-to-GDP, which tilts our bias toward further appreciation. It was at about $800 an ounce at the start of 2008 that the ratio of the price of gold vs. debt-to-GDP (in bps) returned to levels from the early 1980s. Above graphic depicts a prime reason the store-of-value metal should continue rising — U.S. relative indebtedness has leaped to about 140% vs. an average just above 100% since 2012. The fact that debt-to-GDP rose despite one of the longest economic expansions in history to 2020 suggests there’s little to reverse the trend. We see gold staying the upward trajectory and potentially getting overextended like it did to the 2011 peak. An underperforming stock market would be a top support for the metal. 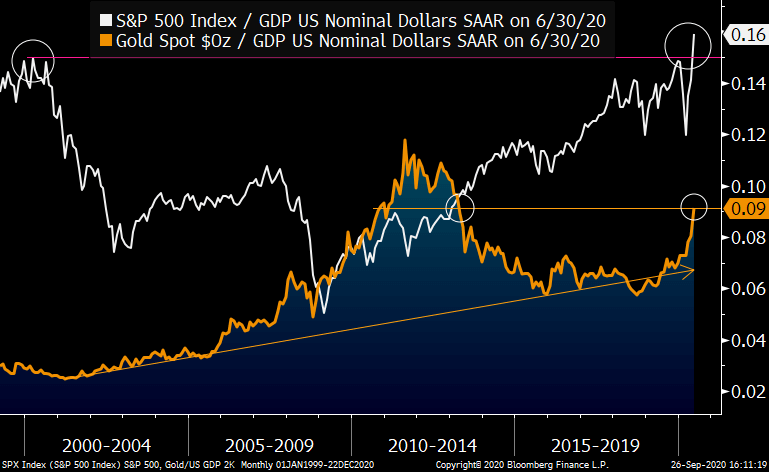 Using U.S. GDP as a relative-value comparison denominator, gold looks low vs. the stock market. Above graphic depicting the store-of-value and S&P 500 vs. U.S. GDP in nominal dollars shows gold at about the same level as seven years ago and the stock index above the internet-bubble peak of 2000. Gold hasn’t kept pace with equity prices since its top in 2011, but the metal looks to be resuming a more-enduring upward trajectory vs. GDP since the start of the millennium. Looking ahead to the next decade, gold appears to have appreciation potential in its favour to simply continue advancing relative to GDP. It’s been two decades since mean-reversion risks in equity prices were last near similar extremes. This stock market measure doesn’t include dividends. 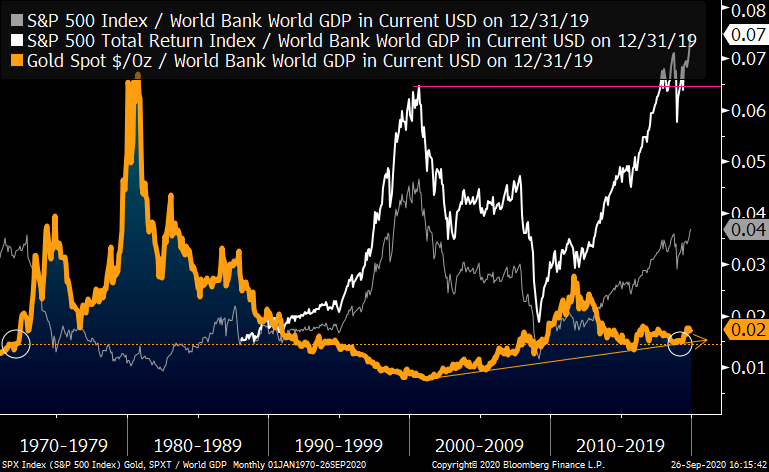 Relative to world GDP, the advancing gold price is set to accelerate when the U.S. stock market experiences some reversion, if history is a guide. At about the same relative level as when President Richard Nixon abandoned the gold standard in 1971, the metal appears low vs. global GDP when compared against peaks in 1980 and 2011 and the elevated stock market. The standout in above graphic is the lofty level of the S&P 500 total return vs. the world economy. This measure, which includes dividends, is above the 2000 peak despite the U.S. representing a smaller portion of the global economy. It was the apex in the U.S. stock market about two decades ago that bottomed the price of gold relative to global GDP. This uptrend is set to accelerate, notably on the back of some potential equity-price mean reversion.