Gold Loses Bullish Momentum Ahead of Next Week’s Key Events 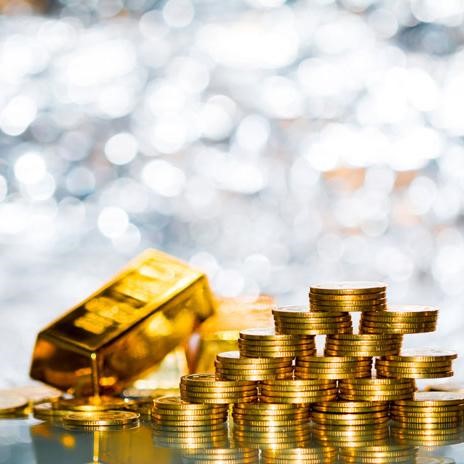 Gold as well as Digital Gold have struggled to preserve its bullish momentum this week. Brexit and US stimulus uncertainty balanced out coronavirus vaccine optimism. A daily close below Rs 48700 could open the door for more losses, while interim resistance is Rs 49700-800.
At the start of the week, the data from China showed that the country’s exports in November surged by 21.1% on a yearly basis. With this reading surpassing the market expectation for an increase of 12% by a wide margin, risk flows remained in control of financial markets. Furthermore, heightened hopes for an EU-UK trade deal and additional stimulus in the US allowed the mood to remain upbeat throughout the day on Monday on Wednesday, the lack of progress in Brexit talks forced investors to adopt a cautious stance and triggered a decisive rebound in the US Dollar Index. Dragged by the renewed USD strength, Gold prices lost 1.6% on the day as they dropped all the way to Rs 48900.
On Thursday, the data from the US showed that the weekly Initial Jobless Claims increased by 137,000 to 853,000 in the week ending December 5th and reminded investors of the weight that the second coronavirus wave is putting on the economy. These developments helped USD stay resilient and forced XAU/USD to remain in the lower bound of its weekly range. Although the US Food and Drug Administration (FDA) announced that it has approved Pfizer-BioNTech COVID-19 vaccine for emergency use, the market reaction remained muted.
Meanwhile, the European Central Bank (ECB) left its policy rate unchanged and expanded the Pandemic Emergency Purchase Programme (PEPP) by €500 billion to a total of €1,850 billion until at least the end of March 2022. However, these policy decisions were largely in line with analysts’ expectations and already priced in the markets.
View for next week
Negotiations between the EU and the UK will reportedly continue over the weekend and developments on that front could cause a significant change in market sentiment at the start of the week. A positive outcome is likely to weigh on the USD and lift Gold prices and vice versa.
On Tuesday, Industrial Production and Retail Sales data from China will be watched closely by the market participants. Later in the day, Industrial Production from the US will be released as well.
On Wednesday, the IHS Markit will publish the Manufacturing PMI reports for Germany, the euro area, the UK and the US. More importantly, the FOMC will announce its policy decisions alongside updated economic projections. Investors don’t expect any changes in the current policy stance but any convincing hints toward adjustments in the asset purchase program could impact the performance of Wall Street’s main indexes. An upsurge in US stocks could be expected to hurt the buck more than it does the precious metal.
The weekly Initial Jobless Claims report from the US on Thursday and the IFO Current Assessment data from Germany on Friday will be looked upon for fresh impetus in the second half of the week. However, with the holidayseason approaching, the trading action is likely to turn subdued after the FOMC event.
Technical view
On the daily chart, the Relative Strength Index (RSI) indicator is staying close to 50, suggesting Gold as well as Digital Gold is struggling to make a decisive move in either direction. However, as long as the price remains above the 200-day SMA, which is currently located at Rs 48700, buyers could look to remain in control of the pair’s movements. 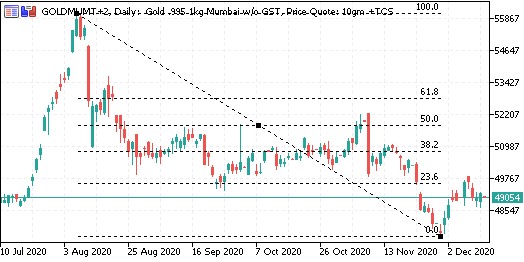 On the upside, the initial resistance is located at Rs 49500, the Fibonacci 23.6% retracement of the June-August rally. When the price broke above that level earlier in the week, it failed to reach the next Fibo resistance, 38.2% retracement, at Rs 50800 and created an interim hurdle at Rs 49850.