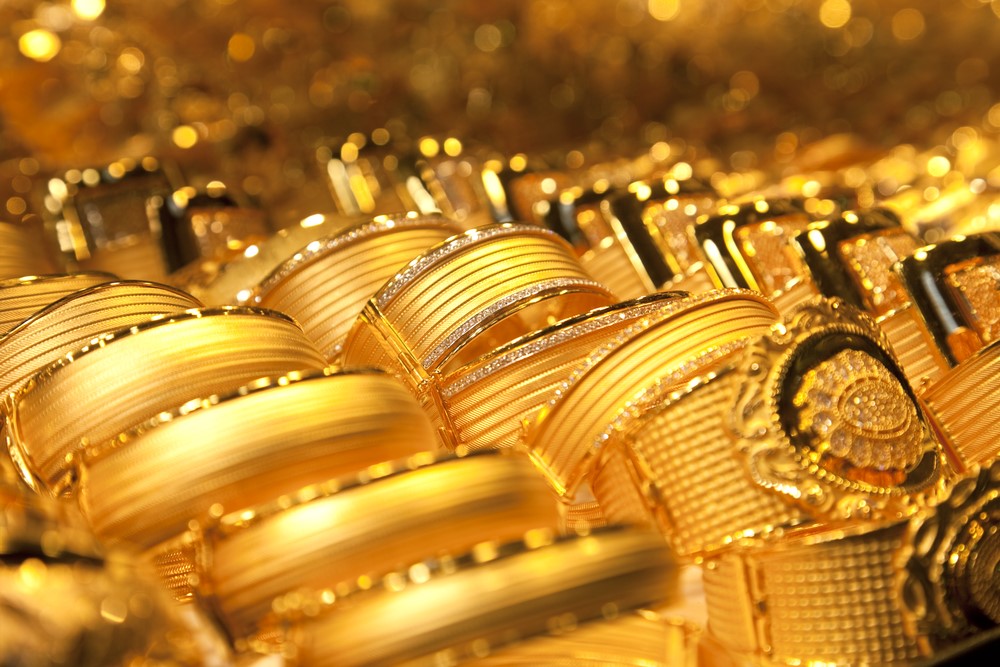 The calendar year 2020 (CY20) may well turn out to be the worst year for gold demand in India since 1995 if the current trends are extrapolated to full-year forecasts. According to the World Gold Council (WGC), gold demand in India thus far in CY20 stands at 252 tonnes, as compared to 496 tonnes in the same period last year. Even if October – December 2019 (Q4CY19) demand of 194 tonnes is added to the CY20 demand till now, the total demand for CY20 will be lower compared to CY19 total demand of 696 tonnes.
CY19 was as it is an anemic year for gold demand. That said, there are a number of events lined up over the next quarter (Q2CY20). The economy is opening up and we don’t know how the demand will shape up in the backdrop of wedding season coinciding with job losses and pay cuts. However, gold will find some takers in case the prices dip below Rs 50,000 per 10 gram.
As per WGC data, the calendar year 1995 was the worst with the yearly gold demand in India at 462 tonnes, which improved marginally to 511 tonnes in 1996, 547 tonnes in 2002 and 642 tonnes in 2009. At 2,972.1 tonnes year-to-date (YTD) demand for physical as well as digital gold at the global level is 10 per cent below the corresponding period in 2019.
A sense of cautious optimism has returned among the trade stemming from the fact that society is gradually learning to live with Covid-19. However, as we are still reeling under the impact of the pandemic and fear of a second wave of infections without clear sight of many variables on consumer behaviour, volatile prices, or length of the disruptions, we will not be able to quantify the impact on the full-year physical as well as digital gold demand in India other than to say that demand could be multi-year low. 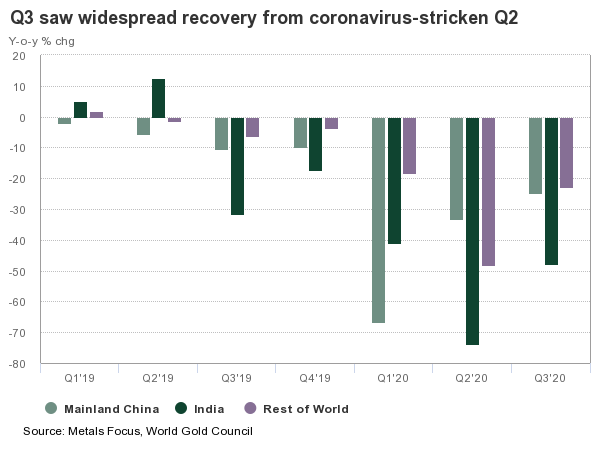 Jewellery demand hit offline as well as online Gold demand for jewellery at the global level slipped 29 per cent YoY to 333 tonnes in Q3CY20. During this period, India witnessed a massive fall of 48 per cent year-on-year (YoY) to 52.8 tonnes, as per WGC data.
YTD jewellery demand totals just 904 tonnes, the weakest in our data series by some margin. This is 30 per cent weaker than the equivalent period of 2009 – the next lowest Q1-Q3 total and the time of the Global Financial Crisis (GFC) – when demand reached 1,291.7 tonnes.
The fall off in jewelry was partially offset by 21% jump in demand from investors, according to the WGC, Gold bars and coins made up most of the increase, as flows into exchange-traded funds slowed from preceding quarters.
Rising gold prices were another deterrent. Between January and September, the US-dollar gold prices jumped 25 per cent. As the local gold price breached Rs 50,000/10 gram mark – a major milestone for India – casual/impulsive purchases were curtailed in favour of need-based buying. Not only did Indian consumers have to cope with recurring lockdowns and unprecedented gold prices, but also the inauspicious periods of Pitru-Paksha and Adhik Maas discouraged buying during September (both periods are considered by Hindus to be inauspicious for gold purchases. 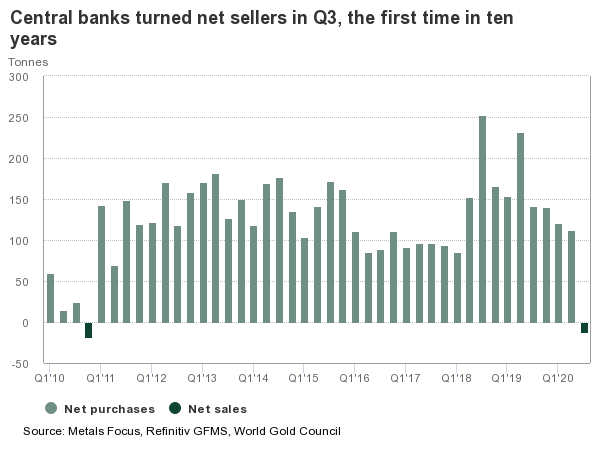 Central banks around the world became gold sellers for the first time since 2010 as some producing nations exploited near-record prices to soften the blow from the coronavirus pandemic. Net sales totaled 12.1 tons of bullion in the third quarter, compared with purchases of 141.9 tons a year earlier. Selling was driven by Uzbekistan and Turkey, while Russia’s central bank posted its first quarterly sale in 13 years, the WGC said. While inflows into exchange-traded funds have driven gold’s advance in 2020, buying by central banks has helped underpin bullion in recent years.