GOLD REBOUNDS AS US CPI ACCELERATES, JUMPING BY MOST SINCE 1981

Inflation in the United States rose at the quickest rate since 1981 in May, as Americans grappled with rising prices for gas, food, and shelter. The Bureau of Labour Statistics’ May Consumer Price Index (CPI) increased 8.6 percent year on year last month, up from 8.3 percent in April.

According to the BLS, the major drivers to the recent increase in inflation were housing, fuel, and food. In May, the energy index increased by 3.9 percent month on month, while the gasoline index increased by 4.1 percent. Energy costs rose 34.6 percent in May compared to the previous year, the biggest since September 2005.

Where Inflation Is … and Isn’t

12-month change in the price of 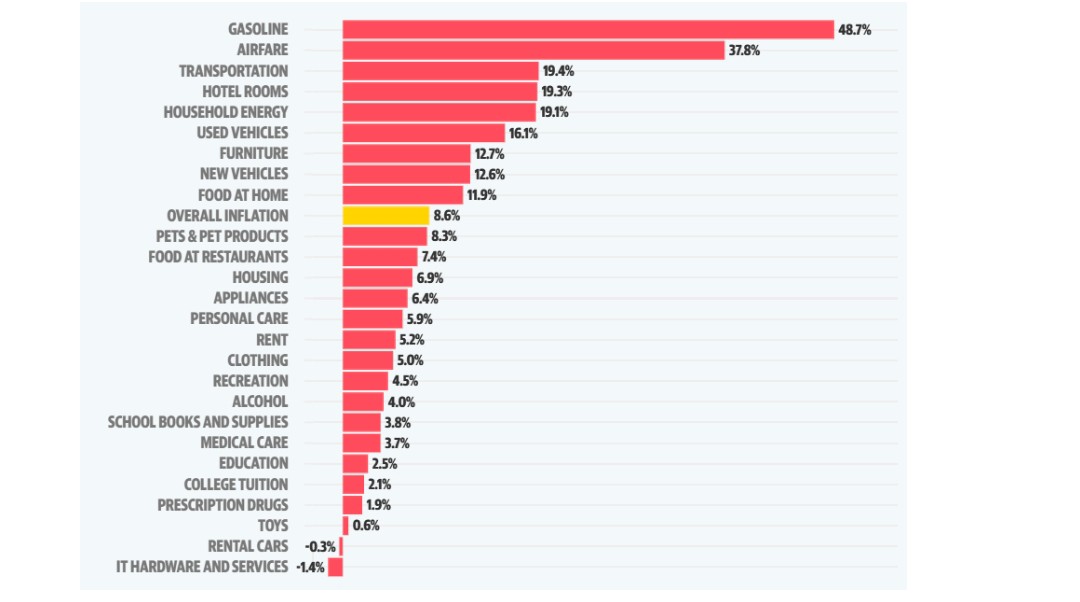 Source: Bureau of Labour Statistics. Data as of May 2022

Following the release of the US May CPI report, gold fell to $1824, its lowest level in three weeks, as Treasury yields rose. But then Gold broke above $1850 and gained strength after drifting sideways in a wide range. From a technical standpoint, gold holding over $1870 would indicate further advances. The next significant resistance level is seen at $1890. On the contrary, a return to current levels below $1850 would put gold under pressure.
As we approach another Federal Reserve meeting next week on 15 June, it will be no surprise if the Fed raises rates by 50 basis points this week to 1.5 percent, followed by another 50 basis points next month. This month also marks the commencement of the balance sheet reduction initiative, which will begin with $47.5 billion and increase to $95 billion every month after three months. In recent weeks, the discussion has evolved from the certainty of 50bps rate hikes in June and July to the possibility of another 50bps boost in September. A number of Fed policymakers have stated that they hope to see the Fed funds rate return to neutral by the end of this year, with a consensus of roughly 2.5 percent, but there is still some variance where the Fed funds rate is concerned.