Gold steadies near one-week high, all eyes on Fed

Gold steadied off a one-week high on Tuesday as investors awaited the U.S. Federal Reserve’s decision on interest rates, with a weaker dollar and faltering global equities lending support. 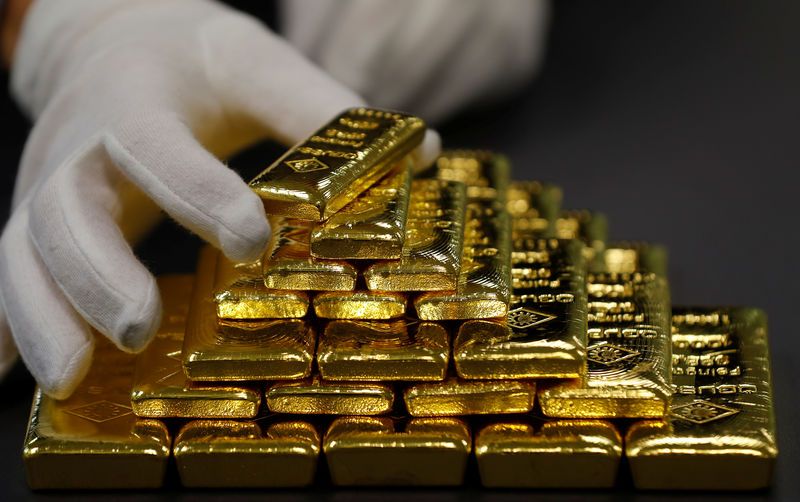 Spot gold was up 0.26 percent at $1,249.11 per ounce at 1:50 p.m. ET, having earlier touched its highest level since Dec. 10 at $1,250.27, just short of a five-month peak of $1,250.55 hit last week.
U.S. gold futures added $1.80 to settle at $1,253.60 per ounce.
“Gold is confidently eyeing the $1,250 highs of the move after enjoying its best day in a week yesterday as markets arrange books ahead of tomorrow’s Fed result,” said Tai Wong, head of base and precious metals derivatives trading at BMO.
“It appears the market is looking for a ‘dovish’ hike.”
The dollar fell to its lowest level in more than a week, while stocks were in the red on the back of mounting concerns about global economic growth, as the U.S. Fed kicks off its two-day policy meeting.
The U.S. central bank is widely expected to raise interest rates for the fourth time this year, but weak stock markets and slowing growth may prompt it to tone down its stance on monetary tightening.
“All sectors of the economy are down; equities, bonds and commodities, so they do have the data to not raise rates,” said Walter Pehowich, executive vice president of investment services at Dillon Gage Metals.
Gold tends to gain when interest rate hike expectations ease because lower rates reduce the opportunity cost of holding non-yielding bullion and weigh on the dollar, in which it is priced.
“I think gold is going to catch a bid here, especially when the economy in U.S., in Germany and in China is slowing down,” Pehowich said.
Gold price risks are “skewed to the upside in 2019,” Standard Chartered analysts said in a note, adding they expect the metal to average $1,300 per ounce next year.
Meanwhile spot palladium slipped .42 percent to $1,253.00 per ounce, after soaring to a record high of $1,269.5 on Monday. The metal continued to trade at a premium to gold.
Palladium is expected to continue its rally due to sustained supply shortfall, Pehowich added.
Silver was down 0.2 percent at $14.63, while platinum shed 0.19 percent to $792