In times of high inflation and geopolitical turmoil, the appeal of gold as a store of value outweighs concerns that rising interest rates will diminish demand for the metal, which does not offer a yield

The last time gold exceeded $1860 was three months ago, and the last time it surged 2% in a single day was six months ago – long enough for market longs to forget. But that’s exactly what happened in Friday’s session, following the closure of the COMEX session, which unofficially placed the market up 3% for the week due to U.S.-fuelled worries of an impending Russia-Ukraine war.

That was when it was revealed that the US believed Russian leader Vladimir Putin had decided to invade Ukraine and had informed the Russian military of his intentions. The United States fears Russia may launch offensive military action or attempt to incite a crisis within Ukraine as early as next week before the Winter Olympics in Beijing concluded.

Some Wall Street banks are even predicting seven interest rate increases this year. All of these are hawkish statements and strong inflation readings. So, with all this discussion of interest rate hikes, is there a chance the Fed will act before March 16th and raise rates by 25 basis points? The markets certainly seemed to think so after Bullard’s speech last Thursday. Fed Funds had shifted to price in a 100 percent chance of a 50 basis point raise at the March meeting, with possibly an inter-meeting boost.

Gold and US Inflation

In times of high inflation and geopolitical turmoil, the appeal of gold as a store of value outweighs concerns that rising interest rates will diminish demand for the metal, which does not offer a yield. The dangers to the outlook have been increasing, and it appears that increased Fed tightening and heightened geopolitical worries will drive many investors to seek refuge in gold. No one will want to short gold as the weekend approaches, so prices should remain supported until next week.

The precious metal is also benefiting from bets that some consumer-price components would remain elevated despite central banks’ efforts, strengthening bullion’s appeal as an inflation hedge. 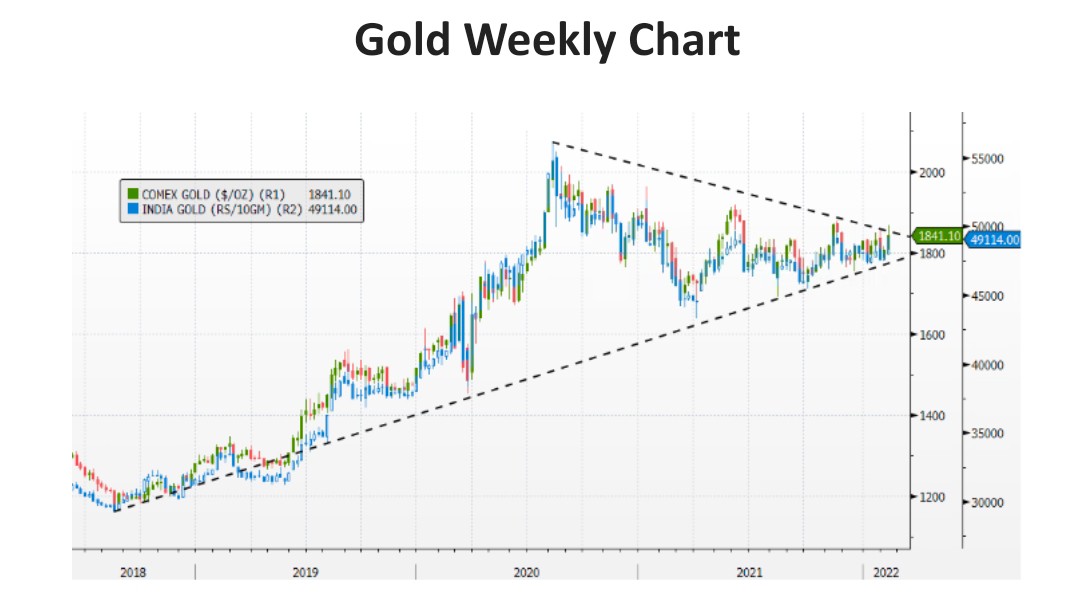 Gold has been consolidating around $1800 for more than a year, but a sequence of higher lows has been developing since the beginning of 2021, and it is now threatening to break out of the long-term wedge. It’s far too early to call Friday’s $35 rise and push through the top a breakout, but it’s worth keeping a watch on. On domestic levels, if prices are able to sustain above Rs 49000, and give a breakout from this symmetric triangle, it will head higher towards 50000 and 55000.