How Much More Downside Is Left In Gold Price?

After a strong run that had lasted about nine months, gold in India is on a slide with its price touching low of Rs 44,000/10gm level. From a high of Rs 58,000 recorded in August, the price is now down 24%. This means gold has technically entered the bear territory.

The slide in gold rates have come due to a sharp drop in its price in the international markets, which fell below the $1700/oz mark a nearly nine-month low level. From its all-time peak at $2080 last August, it has now lost 18%. It is expected that it could slide below the $1500 level, if $1660 support is broken.

The drop in gold prices came on the back of a strong dollar, which was due to the rising bond yields in the world’s largest economy. With investors pouring money into US government bonds to earn higher yields, the attractiveness of the yellow metal as a safe haven diminished a bit, and hence the slide in its price.

Maximum fall in Gold prices in India during bearishness 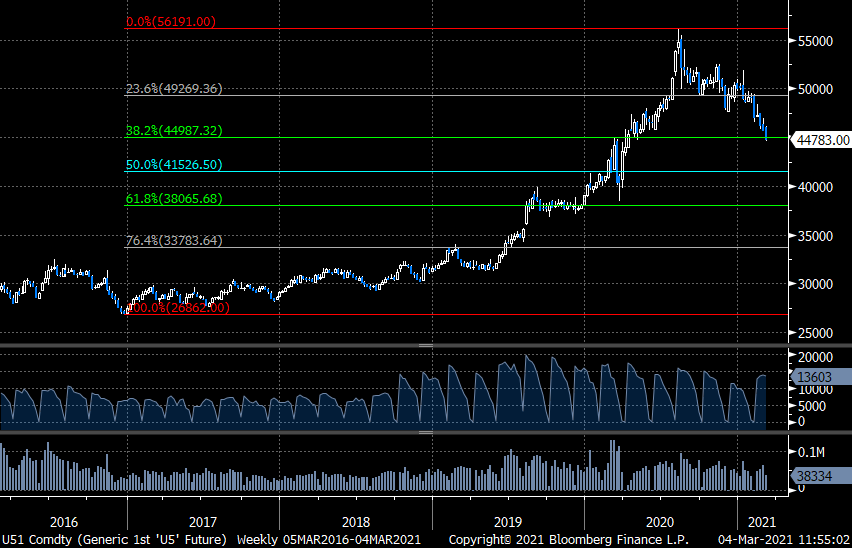 Above chart shows, what is the maximum percentage that Gold prices have fallen in last 17 years from its high levels. It is inferred that maximum fall is 30% that was witnessed in 2014. And now if we say, 30% fall has to come this time, prices could touch level of Rs 41000/10 gm, but probability is very less.

Gold prices are at a 10-month low, given that we have vaccines in play and many more will come in the next few weeks and months to go. Does that mean that the appeal of gold as a safe haven is going to fall in the days to come?

Gold has been used as a safe haven and it worked very well in 2020. It worked very well during the COVID crisis. The financial markets now say that COVID is finished but we all have to live with it and most of the people have not been vaccinated yet. Movements are still restricted though we are no longer in a lockdown. But financial markets always look forward and they are looking a very long way forward to a period when COVID is at least an everyday factor rather than a crisis. Gold has suffered because of that. The story around gold has been narrated very well because of COVID and now that COVID is finished, so too is gold.

There is a prevalent divide between markets and central banks, wherein markets are pricing higher inflation and growth, while central banks remain accommodative and dovish. We assume that central banks will eventually rein in yields with their asset purchases and also help their respective governments in keeping the borrowing costs low. On gold price trajectory, we still remain bullish considering the unprecedented government stimulus, bloated central bank balance sheets and burgeoning sovereign debt. But we think it is very unlikely that the central banks will just let this keep rolling if bonds keep selling off. There is also the fact that central banks are not going to raise short-term interest rates for some year.

While traders who entered to make quick gains may have reason to be worried, investors who see gold as a generational asset should not be too concerned. Over the last two decades, gold has risen by over 10 times, and the long-term steep rise has had its crests and troughs along the way. One must also remember that the supply of gold is limited, and since there is demand from both individuals and central banks of various countries, the price of gold in the long term is more likely to have an upward trajectory.

Gold prices get impacted by several factors including geopolitical tensions, interest rate movements and change in value of the dollar with respect to other currencies, Mounting government debts and real interest rates going deeper into the red amid rising inflation.

One should simply follow one’s asset allocation and continue accumulating gold in a disciplined manner. Lower prices at the time of accumulation would mean better returns for the investor when prices rise. Also, since the interest rates are set to remain low for now, higher inflation levels would mean negative real interest rates for investors. In such a situation, gold will be a better investment as it does provide a hedge against inflation. While the allocation in gold could be anywhere between 5-10% of your investment portfolio, you should invest in gold via sovereign gold bonds. While it offers capital gains in line with gold price movement, it also offers a fixed 2% coupon per year. Another option is gold exchange-traded funds (ETFs) floated by mutual funds that invest in gold. All these options of Gold investing are available on Augmont platform.