Is it time to go back to gold 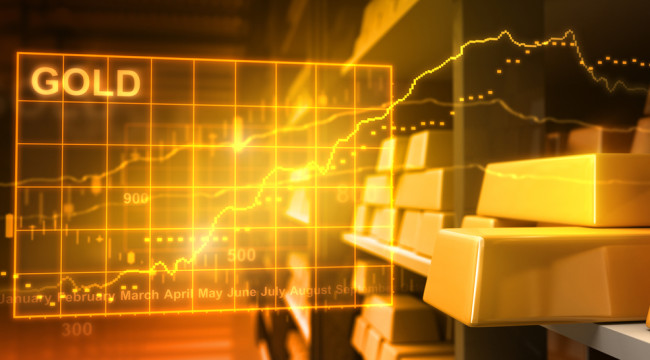 Markets have been more volatile than normal so far this year due to many factors, including geopolitical tensions with North Korea and the Middle East, Italian government upheaval, rampant speculation related to interest rates and the specter of potential trade wars involving the United States, Canada, China, and European powers as a result of tariffs.

Recently the gold price has depended on the dollar’s cross-border flows. They in turn have been driven by market perceptions of increasing credit risks in emerging market currencies, and the Fed’s policy of normalizing interest rates while other major central banks are still applying monetary stimulus. The result has been a stronger dollar on its trade-weighted basis and a weaker gold price.

Spot gold dropped 0.4 percent to $1,225.89 an ounce during Thursdays trading hours, after it rose 0.6 percent on Wednesday. Earlier in the session, the metal hit $1,235.16, its highest in more than a week but eased by the end of the week due to a strengthening dollar.

Gold prices are back under pressure, with the U.S. dollar gaining ground against its major counterparts, and the precious metal may continue to consolidate over the remainder of the week as market attention turns to the Federal Open Market Committee (FOMC) interest rate decision on August 1.

Even though theFOMC is widely expected to keep the benchmark interest rate on hold, Chairman Jerome Powell&amp; Co. are likely to implement higher borrowing-costs over the coming months as officials warn ‘gradually returning interest rates to a more normal level as the economy strengthens is the best way the Fed can help sustain an environment in which American households and businesses can thrive.’

In turn, a batch of hawkish comments may sap the appeal of gold as the FOMC appears to be on track to further embark on its hiking-cycle, and growing expectations for four rate-hikes in 2018 may reinforce a bearish outlook for gold prices on the back of expectations for higher U.S. Treasury yields.

One more interesting thing witnessed during the past week was gold reserves. It seems that strong economies have increased their gold reserves which are a good sign for gold.

CHINA – Officially, China has kept its gold holdings unchanged at 59.24 million ounces since October 2016, or 1,843 metric tons, valuing them at $74.1 billion at end-June. Globally, central banks continue to increase gold reserves, albeit at a slower pace, adding 371.4 tons in 2017, according to the World Gold Council.

However in the past too, China has spent long periods before without revealing increases in gold holdings. When the central bank announced a 57 percent jump in reserves to 53.3 million ounces in July 2015, it was the first update in six years.

So it seems that mysteriously China has been adding to its gold reserves.

RUSSIA- Russia‘s U.S. dollar reserves have shrunk from $96.1 billion in March to just $14.9 billion in May, according to the Russian Central Bank. Its governor, Elvira Nabiullina, says the decision will help protect the Russian economy and diversify the bank’s reserves.

Notably, the Bank of Russia has been buying gold every month since March 2015, overtaking China as the fifth-biggest sovereign holder of gold.

The Russian central bank hinted that it could invest the money from the USD sale not only into gold, but also into International Monetary Fund (IMF) bonds and Chinese bonds.

But why have these economies diversifying to gold? Well, in periods of global financial or political crises, gold is much more useful than securities or cash, although gold is also prone to price fluctuations.

Moving further, it must be noted here that the gold price is affected, of course, by more factors than simply the US dollar and US interest rates. Equity markets can and do affect the gold price, oil prices too, and there is a long list of non-quantifiable factors that can have a dramatic impact on the gold price. Heightened global political and economic tensions on account of a highly erratic US President may encourage more investment demand for gold, for example. And can anyone fully rule out an Italian exit from the Euro zone and the financial crisis that would follow?