Gold prices have been trading between symmetrical triangles and in the range of Rs 46500 to Rs 49500 for the last few months. Prices need to give sustainable breakout of this triangle zone to head higher.

Gold logged a weekly gain of 1.2%, which would represent its sharpest such advance since a 2.85% advance in the week ended Nov. 12. Meanwhile, silver climbed about 0.8% for the week. Gold has risen despite continued expectations the Federal Reserve will move aggressively to raise interest rates, likely beginning in March, and take other actions to withdraw monetary stimulus in an effort to rein in inflation.

The jobs data was in “such contrast” to the ADP private-sector jobs report from Wednesday. ADP had said U.S. businesses shed 301,000 jobs in January, which was the biggest drop since the start of the pandemic. Payrolls were expected to be weak because the spread of the omicron variant was peaking at the time when the government was compiling labor data last month. However, the U.S. added a robust 467,000 jobs in January and hiring was much stronger at the end of 2021 than originally reported. Economists polled by The Wall Street Journal had forecast 150,000 new jobs. Inflation and real negative rates are going to keep fueling the gold price to new record dollar highs. The stage is set.

Technically, the Gold price action looks set to exhibit mean reversion around the psychological level of $1800 once again. The weekly chart further reiterates the long-term narrowing pattern that has taken shape since gold printed the all-time high in August of 2020. Gold currently trading at the mid-level of the $1765 – $1835 range, further reinforcing the precious metal’s mean reversion tendencies witnessed over the last 7 months. 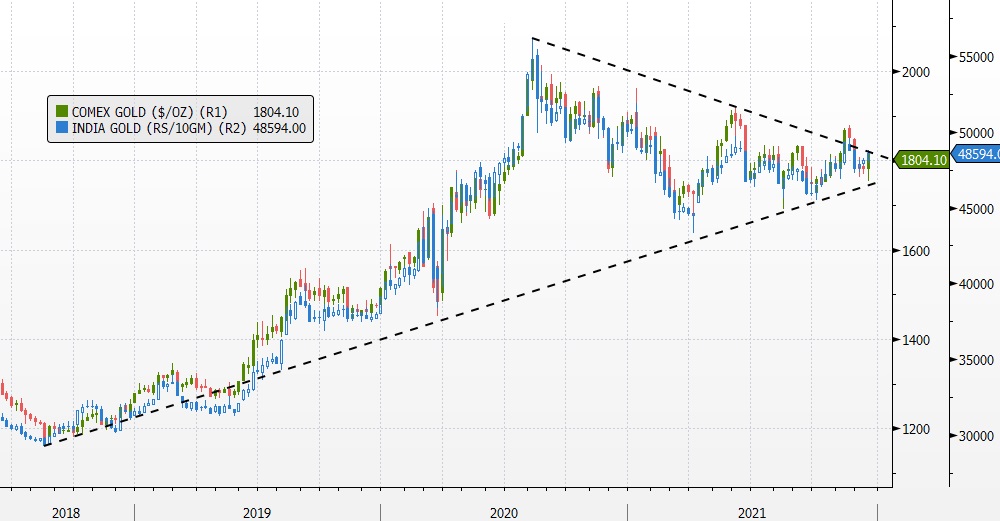 On the domestic front, gold prices have been trading between symmetrical triangles and in the range of Rs 46500 to Rs 49500 for the last few months. Prices need to give sustainable breakout of this triangle zone to head higher.