The rule effectively bans individuals – including gold dealers, distributors, wholesalers, buyers and financial institutions – from buying, selling or facilitating gold-related transactions involving Russia and the various parties that have been sanctioned.

The restrictions are designed to limit Russia’s ability to use gold to circumvent punishing Western sanctions. The transactions ban would in effect apply secondary sanctions on people who trade in gold with Russia. It is another way to close sanctions loopholes, and increase economic pressure on Russian entities

The US Treasury Department (USTD) confirmed on March 24 that Russia’s $136bnworth of gold reserves are subject to secondary sanctions as the West tries toclose down loopholes to its extreme sanction regime.

However, another approximately $380bn of reserve funds are outside the reach of the West and still theoretically at the disposal of the regulator. Additional SWIFT sanctions were also imposed that make it very difficult for Russia to transfer money abroad and are causing problems for it to mobilise the funds that remain under its control.

The US says Russia can and has used gold to support its currency as a way to circumvent the effect of sanctions. One way to do that is by swapping the gold for a more liquid foreign exchange that is not subject to current sanctions.

Russia holds some $136bn, or 21.7% of its total reserves, in physical gold (74mn troy ounces),almost all of which is in Russia. Russia is a major producer of gold and the
CBR has been building up its reserves over the last decade and has the right
to make gold producers sell part or all their production to the central bank, after which they are free to sell any surplus on the international markets. 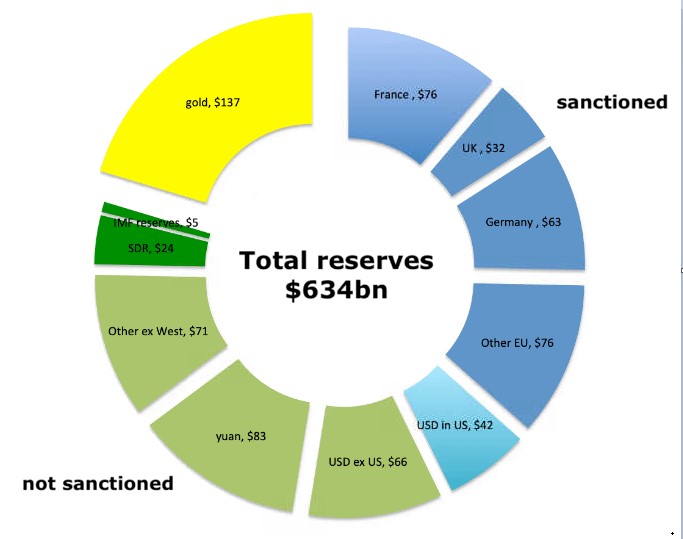 Russia has the world’s fifth biggest gold supply, with more than 2,300 tonnes of gold stored in Bank of Russia vaults in Moscow and St Petersburg. As this gold is outside the reach of the West and physically in Russia it is beyond the reach of sanctions. However, the new rules are an attempt to prevent Russia from selling this gold on the deep and liquid international bullion markets.