Gold will act as an Inflation Hedge in the coming months

Gold prices have been depressed for the last year and have not much moved with other asset classes like equity, metals, energy or crypto. The release of record-busting US CPI-inflation data for October at 6.2% has seriously dented the Federal Reserve’s long-standing argument that high inflation will prove “transitory. Inflation has been above the FEDs comfort zone for the last eight months, so it doesn’t seem transitory and it is likely to remain higher for the next few months. Inflation swap forwards and US 5Year Breakeven, which are at multiyear high levels, suggest US inflation is going to remain higher for an extended period and support gold prices.

We shouldn’t forget the money printing that has happened over the last few quarters and how other hard assets have performed, Gold has lots of room to perform well. US Fed balance sheet has doubled from $4.2 Trn to $8.5 Trn since 2020 to finance the Govt deficits. The monetary stimulus was a common theme for all central banks around the world. Such a financial debasement is very bullish for Gold. M2 money supply has grown 81% in the last 7 years to nearly $20 Trn. Due to this, there is more money in the hands of consumers spending. This is one of the reasons for high inflation. We have real inflationary pressures that the longer they persist, the more of problem that causes and more people will look for an inflation hedge. Gold is one of the best inflation hedges, so we should focus on Gold.

After huge monetary easing, FED is starting to tighten the monetary policy by tapering and raising nominal rates. But we should look at Real Interest Rates, which is Nominal Rate – Inflation, which is still going to be negative. Real Int rates are negative and will remain so an extended period and that is the foundation of the bull market in gold.

Since the start of the pandemic, physical gold demand has been the highest since 2006. Going forward gold traders will be closely watching inflation data and for clues as to how aggressive the fed will be in fighting inflation. Gold is an asset that trades on emotion and momentum and when it begins to move it has the potential for dramatic volatility. 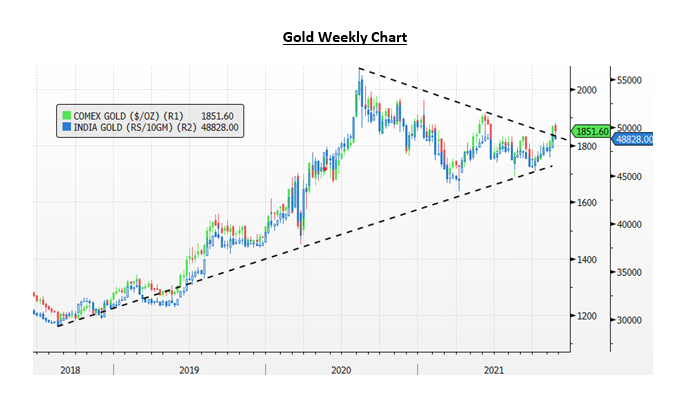 Must Read: Inflation and Gold